Rob Kardashian's ex-girlfriend is worried about him

Rob Kardashian's ex-girlfriend, Adrienne Bailon, is worried about him and is thinking about reaching out to him after hearing he is battling depression. 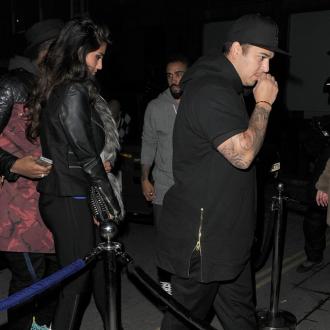 Rob Kardashian's ex-girlfriend is worried about him.

Adrienne Bailon, who split from the 'Keeping Up with the Kardashians' star in 2009 after two years of dating and later underwent laser treatment to get a tattoo of his name removed from her butt, has reportedly been encouraged to reach out to him by his older sister Kim Kardashian's best friend, Jonathan Cheban, amid rumours the 27-year-old reality TV star is battling severe depression.

A source, who overheard them chatting at an event in New York City last Thursday (29.05.14), said: ''Adrienne was sitting with Jonathan Cheban. They were talking about Rob.

''Their conversation was intense and serious. Jonathan was telling Adrienne she should reach out to Rob. He seemed concerned for him.

''Adrienne looked really sad - she was shaking her head, as if she didn't know what to do or say about the whole thing.

''It sounded like she hadn't made up her mind whether or not she wanted to reach out.''

Rob skipped Kim's wedding to Kanye West in Florence, Italy on May 24 after they allegedly had a huge argument about his weight.

The sock designer has gained more than 60 pounds since being dumped by British popstar Rita Ora in late 2012 and has rarely been seen out in public in recent months.

But Rob's younger half-sister Kendall Jenner insists he is okay.