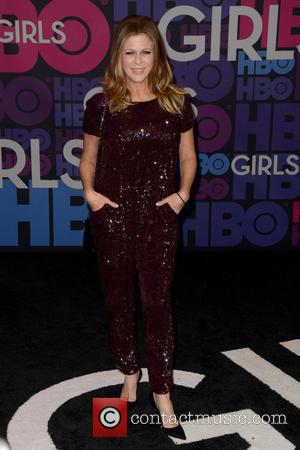 Picture: Rita Wilson - Photographs of the stars of the hit TV show "Girls" as they took to the red carpet for the Season Four Premiere...

The 58-year-old actress took temporary medical leave from Broadway play Fish in the Dark to tackle the health crisis earlier this month (Apr15).

Wilson has revealed doctors found the disease after she asked for a second opinion on results from her annual mammogram scans, which initially came back all clear, and she decided to have both her breasts removed.

She tells People.com, "Last week, with my husband by my side, and with the love and support of family and friends, I underwent a bilateral mastectomy and reconstruction for breast cancer... I am recovering and most importantly, expected to make a full recovery. Why? Because I caught this early, have excellent doctors and because I got a second opinion.

"A friend who had had breast cancer suggested I get a second opinion on my pathology and my gut told me that was the thing to do. A different pathologist found invasive lobular carcinoma. His diagnosis of cancer was confirmed by, yet, another pathologist. I share this to educate others that a second opinion is critical to your health. You have nothing to lose if both opinions match up for the good, and everything to gain if something that was missed is found, which does happen. Early diagnosis is key.

"I feel blessed to have a loving, supportive husband, family, friends and doctors and that I am the beneficiary of advances in the field of breast cancer and reconstruction. I am getting better every day and look forward to renewed health... I hope this will encourage others to get a second opinion and to trust their instincts if something doesn't 'feel' right."

Rita Wilson: It made it easier that Tom Hanks and I had coronavirus at the same time

Rita Wilson had 'chills like never before' during coronavirus battle

Rita Wilson makes first appearance since being struck down with coronavirus