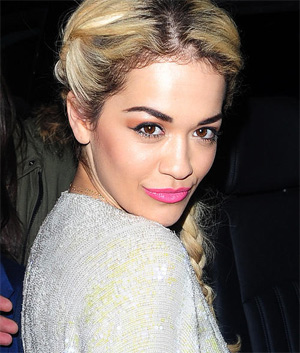 It's 2013 and Rita Ora continues her unstoppable domination of the UK charts with the release of her new single 'Radioactive' taken from her #1 certified platinum debut album in the UK, 'ORA'. The Roc Nation / Columbia signing had a phenomenal rise in 2012, the year that she was the only artist to have three #1 singles in a row and proved herself as a force to be reckoned with on the stage, from her European tour with rock giants Coldplay, supporting Drake and playing every major UK music festival, not to mention an unforgettable performance at JAY Z's Made In America Festival!

From the off, 'Radioactive' boasts an instantaneous beat leading to an anthemic chorus and with remixes from Zed Bias, Waze and Odyssey, The Flexican, Baggi Begovic and Lucien Foort, the track set to take over dancefloors across the world. The video for 'Radioactive'

Last night it was announced that Rita has been nominated for an incredible THREE Brit Awards! The categories are the coveted 'British Single' for both her feature on DJ Fresh's 'Hot Right Now' and her debut single 'RIP', and for best 'British Newcomer'!

At the end of last year, Rita announced her UK headline tour, Radioactive Tour.  Due to an unprecedented demand for tickets all but two shows have already sold out and four extra dates have been added, including a second date at London's Shepherds Bush Empire! Also announced was the support of hot new female rapper Iggy Azalea whose recent sell out shows and self-released mix-tapes have developed a cult following around the world.

'Radioactive' impacts on the 10th February on Roc Nation / Columbia Records. Available to pre-order on iTunes from January 18th