Rita Ora is planning an Ibiza holiday with her new friend Kate Moss after her fallout with former ''wifey'', model Cara Delevingne. 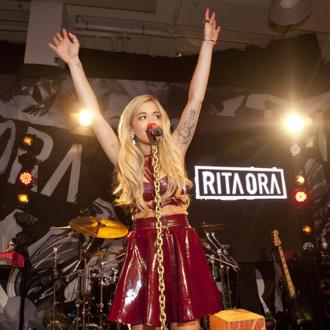 The 'Radioactive' singer and the 39-year-old supermodel have struck up a close bond since her fallout with former ''wifey'' and best friend, model Cara Delevingne.

Rita, 22, reportedly split ties with Cara after the model crashed the stage during a gig last month.

A source told The Sun newspaper: ''Rita sees Kate as an upgrade from Cara, she knows Kate can give her advice about making her career last decades. She started to see Cara as a liability after she interrupted her set at a DKNY fashion show last month. Things have deteriorated since then.''

Rita and Kate are now reportedly planning a couple's vacation with their respective men DJ Calvin Harris and The Kills rocker Jamie Hince.

The source added: ''Cara was jealous of Rita's relationship with Calvin but this time he's not left out. He's going to Ibiza with Rita, Kate and her husband Jamie Hince.''

Tension between Cara and Rita heightened when the singer began dating Calvin in May.

Since falling out with Rita, Cara has since been spotted on numerous nights out in recent weeks with her new pal Rihanna, with the pair recently enjoying a break on a yacht in the South of France.

Now Cara and Rihanna are planning another single girls holiday when the model turns 21 next month.

A source revealed: ''Rihanna wants to jet Cara to Barbados for her 21st birthday present. She wants them to stay in a suite in her favourite Barbados haunt, the Sandy Lane hotel.''