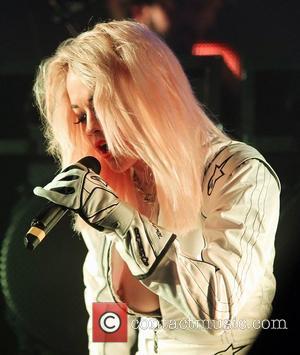 Rita Ora has apologised to her fans for an embarrassing wardrobe malfunction at the Red Bull Culture Clash event at Wembley Arena on Wednesday evening (November 8, 2012). The R.I.P singer exposed a little too much in her risque outfit and took to Twitter this morning to joke about the incident.

"Yes. It's true. I got straight off a motorbike from O2 to Wembley, I didn't have time to change.I didn't have time to change and then all of a sudden the zip got lower and lower, I rushed on stage and pop! It happened, f**k!" The chart-topping singer added, "Sorry guys (How embarrassing). Apologised! Despite that amazing show! :) LOL". Other than Ora's slight hitch, the unique event ran pretty smoothly. It saw four different soundsystems being pitched against each other, with audience decibels rating each act. The rules were dictated by DJ's Tim Westwood and Gemma Cairney - their Radio 1 pal Annie Mac boasted a strong roster that included Katy B, Ms Dynamite, Maverick Sabre and Example. However, it was Boy Better Know, with the help of Hot Chip and Lethal, who roused the evening's biggest cheers and eventually took the Red Bull crown.

21-year-old Ora became the first artist in 2012 to have three consecutive No.1 singles, with Hot Right Now, How We Do (Party) and R.I.P.