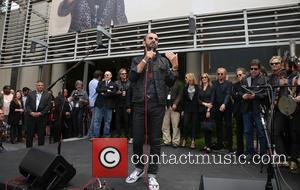 Lewis, who turns 80 years on 29 September (15), is currently hitting U.K. venues as part of his farewell tour, and he had a star-studded finale at the Palladium.

Starr and Plant wheeled a birthday cake onto the stage and joined a host of other musicians and fans in singing Happy Birthday to the Great Balls of Fire hitmaker.

Starr later took to Twitter and wrote, "Had a great time at the Jerry Lee Lewis show in London happy birthday Jerry peace and love."