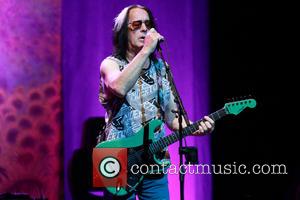 Ringo Starr is offering fans interactive drumming lessons as part of a major new exhibition at the Grammy Museum in Los Angeles.

Visitors to the Ringo: Peace & Love event, which opens on 12 June (13), will be able to check out the drum kits Starr played when the Beatles hit Shea Stadium and performed on the Ed Sullivan show in New York, the suit he wore on the cover of the Sgt. Pepper's Lonely Hearts Band album cover and the cape he wore in Help!, among other items.

And they'll also be able to take a lesson with the rocker, who has recorded a video to help wannabe drummers.

The exhibition will be the Grammy Museum's first dedicated to a drummer, and will also feature a collection of artefacts from Starr's life, rare and never before seen photographs, documents and personal letters.

Ringo: Peace & Love will run until November (13), after which the exhibition will tour select cities.