Ringo Starr Not 'Knocked Out' By John Bonham's Drumming 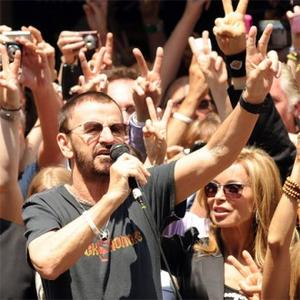 The Beatles drummer was never a fan of the late Led Zeppelin sticksman's lengthy mid-song workouts, as he believes the drummer shouldn't be the focus of rock tracks.

He told USA Today newspaper: "I don't listen to records for The Drums. John Bonham's incredible solos didn't knock me out. I don't feel you need solos.

"You need to feel emotion in the track. It's no good calling me if you like modern jazz. I play pop and rock. I support the song. I can hold steady time."

The 71-year-old star - who was in The Beatles with Sir Paul McCartney, George Harrison and John Lennon - also thinks he has been more appreciated since remastered versions of their albums were released in 2009.

He added: "I love the remasters because now people can hear me.

"It used to be John, Paul, George and Ringo. And why not? Look at those writers. Now people say, 'Oh, maybe he could play.' It never stopped me because I knew from hanging out with musicians that my part on those records was always appreciated."