It was revealed early last week that Paul McCartney and Ringo Starr would be among the performers at this years Grammy Awards, a prospect that had a number of people speculating that this spelled an on-stage reunion between the two surviving Beatles. Whilst we still wait on any word regarding that, Ringo has confirmed that the two will be reuniting on stage soon, but not at the Grammys. 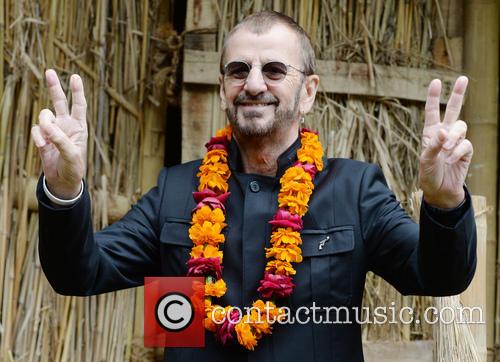 The drummer was in attendance at an awards gala put on by The David Lynch Foundation in Los Angeles on Monday, 20 January, where he was bestowed with the Lifetime of Peace & Love Award. Whilst there, he was grilled on his upcoming Grammys appearance and whilst he sidestepped the part concerning whether he and Paul will be performing together at the ceremony, he did confirm that a special performance involving the two will be taking place some time before it.

“To celebrate the 50 years since we landed in New York in February [1964], they are putting on a big show on Monday and we will be doing it there,” Ringo told Access Hollywood during the awards event. The special he was discussing is called 'The Night That Changed America: A Grammys Salute to The Beatles' and whilst this may be a separate event to the actual Grammys, Ringo's announcement has only heightened speculation further regarding a surviving-Beatles reunion at this weekend's big night for music.

Ringo and Paul [both middle] are the only surviving Beatles members

Speculation continues to mount around the Grammys because Ringo never denied that he and Paul would be performing together on Grammy Sunday (26 Jan.), and with this being the 50th year since The Beatles broke America, it would only make sense that the two would perform together.

'The Night That Changed America: A Grammys Salute to The Beatles' will take place on 9 February, 50 years to the date since The Beatles first appeared on The Ed Sullivan Show, making history in the progress. The Grammys will be held on Sunday, 26 Jan., and something tells us we won't find out about these two's possible reunion until then.

Watch the video for The Beatle's cover of 'Words of Love'