Rihanna planned to approach British singer Elly Jackson from La Roux for a collaboration, but the discussion never happened, much to the relief of the 'In For The Kill' singer. 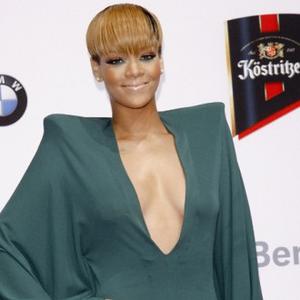 The 'Umbrella' hitmaker - who was assaulted by then-boyfriend Chris Brown last February - was keen to record a track with the duo's singer Elly Jackson, but the British star admits she is still waiting to be approached.

Elly said: "I've had three or four offers for collaborations in America. Big, big artists. Rihanna was very interested for a time.

"That was weird. My A and R man said, 'Rihanna's going to call' but that was the last I heard of it. She didn't call! It was around the time of er, troubles in her life."

Despite never receiving the offer, Elly - who is joined in La Roux by producer Ben Langmaid - admits she would never have accepted it anyway.

She added: "To be honest, do I really want to work with Rihanna? Not really. I'm more interested in what the phone call would be like."

While the 'In For The Kill' singer is reluctant to work with Rihanna, she does have other collaborations lined up.

She added: "I've just spoken to Giggs, the rapper, and I'm hopefully doing a track with him and Liam Howlett from The Prodigy. Liam's made a beat and me and Giggs are going to cover it."