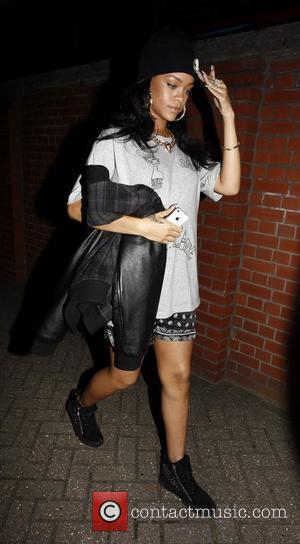 Rihanna will be moving forward with her acting aspirations by providing a voiceover in the animated film 'Happy Smekday!' RiRi may be the centre of news at the moment, with two of her ex-boyfriends apparently fighting over her in Drake and Chris Brown, but for the star herself it's business as usual and she'll be following up her big-screen debut in sci-fi action movie 'Battleship' with this role in the film adaptation of Adam Rex's children's book 'The True Meaning Of Smekday'.
The Press Association reports that Rihanna is currently in talks with the DreamWorks animation company, with 'The Big Bang Theory's' Jim Parsons also set to get on board. No further casting has been announced yet but Tim Johnson has been revealed to be directing the film; a man with experience in animated films, he was co-director for 'Antz' which starred Woody Allen and Sylvester Stallone.
The story revolvs around 11-year-old human Tip, and is about a group of aliens invading Earth on Christmas Eve after they have been forced by a villainous race to leave their own planet. It's scheduled for a late 2014 release. Rihanna has been open about her desire to do more acting, previously saying "I want to take my time, start with baby steps. Start with small roles that I feel I could pull off in a professional way."