Rihanna Steps Out With British Boxer 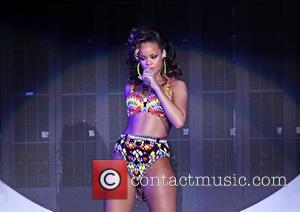 Sexy R&B star Rihanna has sparked rumours of a love match with British boxer Dudley O'shaughnessy after they were seen enjoying a night out together in London.
The Bajan beauty took her Loud tour to the U.K. this week (begs03Oct11) and spent Thursday night (06Oct11) partying with the sportsman and model after reportedly handpicking him to appear in the video for her new single We Found Love.
Sources claim sparks flew between the young stars on the set of the promo, which was shot on an Irish farm last month (Sep11), and they reunited in the U.K. capital following Rihanna's gig at the O2 Arena.
According to British newspaper the Daily Mail, Rihanna and O'Shaughnessy shared drinks at popular nightclub Mahiki before they were snapped leaving the venue together in the early hours of Friday (07Oct11).
Rihanna has been largely single since splitting from Los Angeles Dodgers baseball star Matt Kemp last December (10).