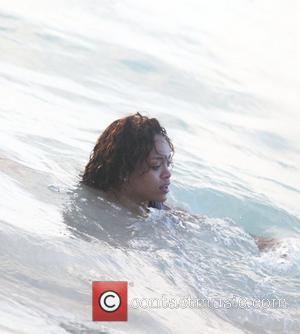 Picture: Rihanna enjoys a swim in the sea The sexy singer is spending her Christmas vacation with her family in her native country Barbados - 29.12.11

Rihanna was just one of many to blow off the People's Choice Awards this week, making somewhat of a mockery of the event despite the fact that it was celebrating its 38th edition. The woes started when Katy Perry - who had been expected to make her first public appearance since splitting with British comedian Russell Brand - dropped out of the ceremony, despite eventually going on to win a slew of awards. 'Harry Potter And The Deathly Hallows: Part 2' meanwhile took three gongs home but, again, saw none of its stars in attendance.
The really galling news for the organisers however must've been the decision by pop star Rihanna to skip the show, despite winning the 'Favourite R&B Artist' honour. The reason for her absence? Entertainment site Tmz.com reports that she had elected to go and watch the Los Angeles Clippers play basketball instead; that wasn't the real salt in the wound though, it was the fact that the game was taking place literally across the street in the city's Staples Centre. Oof.
One star who did turn up was 'Glee' actress Lea Michele, and thankfully she at least seemed happy to be there, as well she might've having taken the Best Comedy Actress award, beating out co-star Jane Lynch in the process. "I want to dedicate this to my amazing cast, my 'Glee' club. You are my family and my best friends. I'm an only child and now I have 11 other siblings," she said in her speech. If only the other winners had shown such manners.