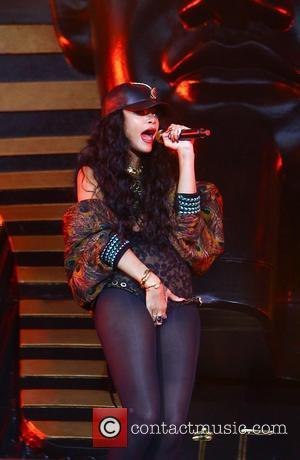 Rihanna must have been hungry after her headline set at the Wireless Festival in London this past weekend. The 24-year-old singer requested a delivery from a local Nando's eatery, with the bill totalling 7,000 Gbp.
A backstage worker at the festival told the Daily Star, "Rihanna ordered every item from the restaurant and asked for it to be delivered to her private backstage area". Nando's were happy to process the order though were forced to close their doors for the remainder of the day, because they had ran out of food. The insider added, "The restaurant had to shut their doors for the remainder of the day as they had no stock left.Everyone was laughing, saying that only Rihanna could clear out Nando's". The Barbadian star also spent a small fortune on her entourage and security for the festival appearance, which consisted of at least 90 people. The source added, "It was mad seeing so many people crowding around one person.She had five large dressing rooms for her to relax before and after her set. She also had her own bathroom, so she didn't have to use the same toilet as anyone else".
Rihanna closed the Wireless Festival in London's Hyde Park on Sunday (July 8, 2012), headlining a bill that also included Jessie J, Cher Lloyd, Rizzle Kicks and PITBULL.