Rihanna wowed the audience as she performed at the 'American Idol' final last night (23.05.12) in a black bikini top, long trousers and with waist-length dreadlocks. 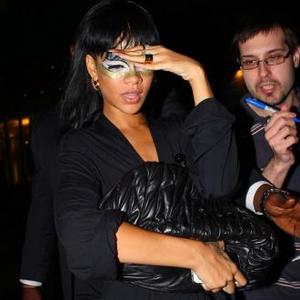 Rihanna wowed the audience as she performed at the 'American Idol' final last night (23.05.12).

The Bajan beauty appeared alongside a number of guest performers including Chaka Khan, Neil Diamond and 'American Idol' judge Jennifer Lopez as the 24-year-old stunner played her new single 'Where Have You Been'.

Rihanna sported some radical-looking waist-length dreadlocks as she performed onstage in a racy black bikini top and long black skirt.

One fan asked her on twitter how heavy her new-look hair was and the 'Umbrella' hitmaker replied: ''As [heavy as] Goliath's balls''.

The crowd gave Rihanna a rapturous reception at the end of her song, and she revealed The Feeling was mutual by saying: ''I love you, 'Idol'.''

But the main triumph of the night was Philip Phillips being crowned the winner of this year's 'American Idol', meaning he was the fifth male contestant to win the title in as many years.