The 26 year-old singer took to Twitter to post a snap of TLC posing topless, just after members of the girl group slammed her for doing the same exact thing. 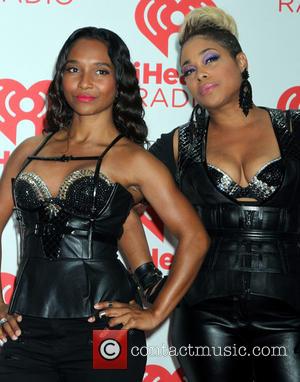 The 26 year-old singer was recently blasted by TLC's Tionne "T-Boz" Watkins and Rozonda "Chilli" Thomas for using the "sex sells" tactic to promote herself.

The band members made the criticisms when appeared on Australia's Sunrise 7 on Thursday (June 5th), ahead of their gig in Sydney.

"Every time I see you, you don't have to be naked," T-Boz said of Rihanna. "It's hard for us to say anything because anytime we do, they say, 'Oh TLC must be jealous,' but I call a spade a spade.

"We became the biggest girl selling group of all time with our clothes on and that says a lot," she added. "We could go around too with booby cakes [breasts] out all day long."

In response to this, RiRi took to Twitter and changed the background of her Twitter page to an old photograph of the TLC singers posing topless, thus proving that they must have also used the "sex sells" tactic at least one time.

To defend herself even further, the 'Diamonds' singer then posted a snap of herself sticking her tongue out, with the caption: "When there's no changing the fact that I'm me, and they're well...they're them."

This isn't the first time Rihanna has used social media as a way to respond to criticism by another star. Last month, Charlie Sheen vented his fury at the Grammy-winning singer after she declined his request to be introduced to his fiancé, Brett Rossi AKA Scottine Ross, while they were eating at the same restaurant.

MORE: Rihanna Is Cool With 'Family Guy's' Jab At Her Fashion Choices

In response Rihanna changed her Twitter banner to a photo of herself signing an autograph for a fan with Sheen's head superimposed onto the fan's body. She also tweeted, "If that old queen don't get ha diapers out of a bunch..."

When there's no changing the fact that I'm me, and they're well...they're them. rel="nofollow" pic.twitter.com/RCF4TqxN69