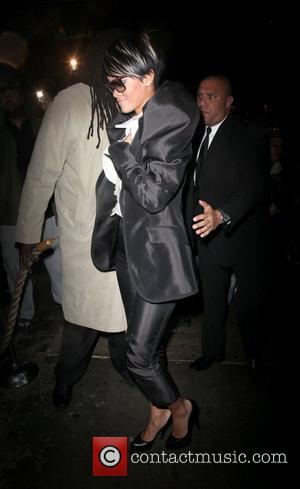 Pop princess Rihanna is getting her career back on track after landing four nominations for the 2009 Urban Music Awards.
The Umbrella hitmaker, who is bouncing back after an alleged February (09) bust-up with ex-boyfriend Chris Brown, is up for the top categories of Best Female Act, Best R&B Act and Artist of the Year.
And Rihanna's Rehab music video, which features Justin Timberlake, is among the nominees for Best Music Video.
She will go up against artists like Keyshia Cole, Robin Thicke and Bobby V in Best R&B Act category, while Amy Winehouse, Estelle, M.I.A. and Keri Hilson will challenge fer for the Best Female crown.
V has also received a nod in the Best Male category, alongside Flo Rida and Kid Cudi, and Jay-Z will compete against rappers Kanye West and Lil Wayne for the Best Hip Hop prize.
The Lollipop star is also nominated for Best Music Video (Ms. Officer), going head to head with Akon (Beautiful), Ne-Yo (Ms. Independent), Lady Gaga (Poker Face) and Rihanna.
Meanwhile, West's 808's & Heartbreak, John Legend's Evolver, Jadakiss' The Last Kiss and Seal's Soul releases are all recognised in the Best Album category.
Other artists up for Urban Music Awards this year include T-Pain and Ludacris (Best Collaboration for Chopped & Screwed), Sean Paul (Best International Reggae), Shakira (Best International Latino) and Mary Mary (Best Gospel).
The awards, voted for by fans online, will be handed out on 17 July (09) in New York City.