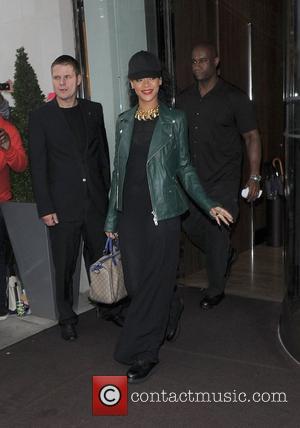 Picture: Rihanna leaving her hotel and heading to a second day of meetings with River Island, regarding her clothing range. London, England - 29.08.12

The line-up for next week's 2012 Mtv Video Music Awards was already looking pretty stellar. And it just got even more impressive, with the announcement that Rihanna and Frank Ocean will both be joining the bill. Still no Lady GaGa, which won't impress those that are disgruntled at her omission from the show, but hey, she's busy with her world tour so we're sure she's not losing any sleep over it.
Frank Ocean caused a stir with the release of his album Channel Orange earlier this year, not least because its release was preceded by his announcement that he is bisexual - something that had him in the headlines prior to the album coming out. And let's face it, ne'er a day goes by when Rihanna isn't in the headlines, so both additions to the bill are a decent coup for the awards ceremony. The event already counts Taylor Swift, One Direction, Green Day and Pink amongst its line-up and Alicia Keys will also be putting in an appearance.
The 2012 Mtv Video Music Awards will be hosted by the comedian Kevin Hart. Rihanna and Drake are leading the nominations table and the awards will be presented by a host of music and screen stars, including Andy Samberg, Wiz Khalifa, Miley Cyrus and The Wanted. The organisers have even got some Olympic talent on board, with the US Women's Olympic Gymnastics Team also scheduled to present an award.