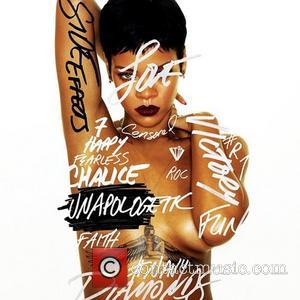 Picture: Rihanna posted this image to Instagram with the caption 'ALBUM COVER'

Rihanna has broken her silence after she was embroiled in a drug photo scandal at Coachella in April (12), denying allegations she was snorting cocaine off her bodyguard's head.

The We Found Love singer sparked controversy after sharing a snap of herself at the California music festival sitting on a security worker's shoulders and pouring a mystery substance onto his scalp.

But Rihanna is adamant she was rolling a marijuana joint and admits she was upset by insinuations she was dabbling with harder drugs.

She tells U.S. Vogue magazine, "They knew what it was. They knew it was marijuana. It was completely clear to them. I just thought it was uncalled for. I don't do cocaine. I don't like being associated with anything that's untrue."