Rihanna, Chris Brown Back Together For 2 New Remixes 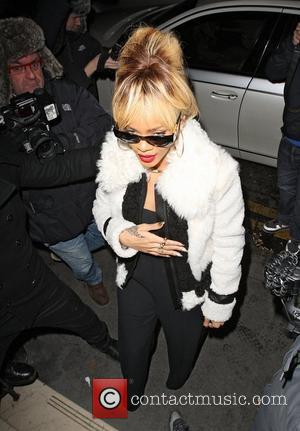 Rihanna and Chris Brown have reunited in the studio to collaborate on two new remixes. The tracks hit the web on Monday (February 20,2012), with Brown singing on a remix of his former girlfriend's track 'Birthday Cake' and Rihanna returning the favor by appearing on a version of Brown's 'Turn up the Music'.
The tracks first surfaced after Brown tweeted a link to the new version of his song on Monday, with Rihanna later re-tweeting it and later discussing the remix of Birthday Cake. The reunion may come as a surprise to some fans, given the couple's well-publicized split in 2009 after Brown assaulted the Barbadian singer just hours before the Grammy Awards in Los Angeles. Pictures of the singer's bloodied and battered face began surfacing online and Brown suddenly became one of the most hated men in the music industry. Since then, he has undergone rehabilitation and completed his comeback with a win at the Grammys last week. Despite reports that Rihanna is now on good-terms with the F.A.M.E star, public feeling towards him has still not fully reached the heights of 2008 and a series of fierce tweets hitting out at his critics recently hasn't done anything to alleviate that. Nevertheless, it appears the former couple are now looking to move on and Brown actually tweeted Rihanna a 'happy birthday' message on Monday, when she turned 24-years-old.
Reviewing the new remixes, the Los Angeles Times heaped most praise on the controversial Birthday Cake, saying, "This is the song that will really get people talking - and not in a good way. Brown makes far from a subtle entrance, declaring his intents from the first line. As a mere collection of sounds and beats, it's provocative and exciting". Brown's 'Turn up the Music' fared less well, with the Times bluntly commenting, "By far the safer track. So safe I can't really think of anything more to say about it, other than it sounds like reconstituted Kylie Minogue".