Drake has been spending a lot of time with Rihanna during the UK leg of her ‘Anti’ tour.

It looks like Rihanna and Drake’s on-again, off-again romance is definitely back on, as the two have partied together for four nights in a row in the UK. In the early hours of Saturday morning (July 2), the pair were pictured at London’s Tape nightclub together, fuelling reconciliation rumours. 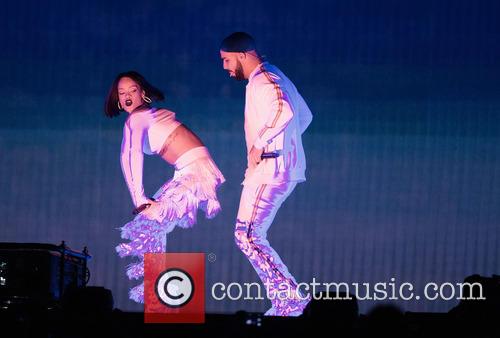 Rihanna and Drake are said to be back together.

On Wednesday night Drake joined Rihanna on stage for a rendition of their hit ‘Work’, telling the crowd: “Shout out to the most beautiful, talented woman I've ever seen. She goes by the name of Rihanna ... I'm getting my heart broken.”

The pair had been spotted out partying together on Tuesday night and Thursday night, before continuing their party on Friday. According to the Daily Mail they arrived at Tape nightclub just minutes apart.

Drake had been rumoured to be dating model Hailey Baldwin, after they were spotted “getting cozy,” at his Memorial Day party in June. But a source told People magazine that Hailey was just a fling and his heart has always been with Rihanna.

"Hailey was a fling, but Drake has always wanted to make things work with Rihanna," the source said. "They are still dating," the source added, of Rihanna and Drake. "Things get more serious when they're in the same place."

More: Rihanna And Drake Fuel Reconciliation Rumours After Second Late Night Out In A Row

Rumours of Rihanna and Drake’s reconciliation began in May, with a source telling People they were keeping the reunion private. "They have been keeping it a secret because this time around, they want to do it right and keep their relationship private," a source told the magazine.