Rihanna and Chris Brown are back together again after being spotted cuddling at an LA Lakers basketball game on Christmas Day (25.12.12). 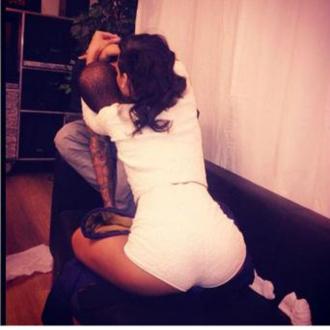 The 'Diamonds' hitmaker rekindled her romance with the 'Turn Up The Music' singer earlier this year and, after splitting up this month, the pair looked smitten once again on Christmas Day (25.12.12) as they enjoyed an LA Lakers basketball game together.

Rihanna, 24, was seen whispering in her boyfriend's ear and cuddling him as they cheered on the players and sipped drinks at the Staples Center in Los Angeles.

The Bajan beauty was also spotted wearing a gold collar necklace, which is thought to be a gift from Chris, 23 - who is still on probation after violently beating her in 2009.

Gossip website TMZ reported that the loved-up couple arrived together in the same car, but entered separately.

Although things seem to be going well, Chris' ex-girlfriend Karrueche Tran is still in the picture after photographs of the former couple enjoying dinner together emerged recently, and Rihanna is trying her best to outdo the model through social-networking sites.

A source revealed to The Sun newspaper: ''Rihanna and Karrueche are really fighting over Chris and have been sending each other coded messages online for weeks.

''They hate each other but Chris seems content to carry on with them at the same time. They were competing over Christmas to send Chris the most loved-up messages possible.

''Rihanna may have got Chris on Christmas Day but he sees no reason not to see Karrueche too.''