Played For A Fool? Rihanna And Chris Brown Confirm They're Back Together 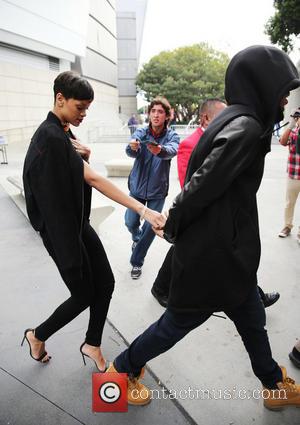 Rihanna and Chris Brown are officially back together, four years after he brutally assaulted her on the eve of the Grammy Awards in 2009. "Even if it's a mistake, it's my mistake," the 24-year-old singer tells the latest issue of Rolling Stone magazine, "He made a mistake, and he's paid his dues." Brown is still on probation for the vicious attack, which made headlines around the world at the time. Their relationship appeared dead and buried for years, though speculation of a reunion remained in the tabloids on a weekly basis throughout 2012.

"When you add up the pieces from the outside, it's not the cutest puzzle in the world," Rihanna admitted. "[But] I wasn't going to let anybody's opinion get in the way of that. After being tormented for so many years, being angry and dark, I'd rather just live my truth and take the backlash. Sometimes people need support and encouragement, instead of ridicule and criticism and bashing." Brown has certainly taken his fair share of public bashing over the years, making him one of the most despised pop stars on the planet outside of his legion of dedicated fans.

Chris Brown had initially denied the assault charges levelled against him in 2009, though eventually pleaded guilty and received one year's probation and domestic violence counselling. He has since been involved in numerous violent incidents, including a fight with Drake at a New York nightclub and, last weekend, a scuffle with Frank Ocean at a Los Angeles recording studio. Nevertheless, Rihanna insists her boyfriend has changed, "He doesn't have the luxury of fucking up again. That's just not an option. I wouldn't have gone this far if I ever thought that was a possibility. You see us walking somewhere, driving somewhere, in the studio, in the club, and you think you know. But it's different now."