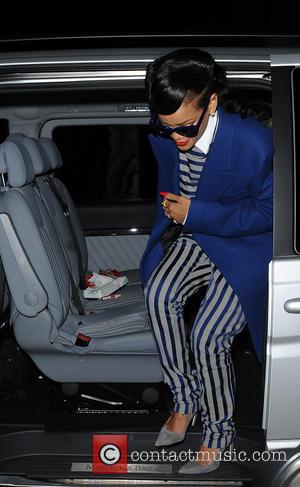 The release of Rihanna’s seventh studio album hasn’t come without a significant fanfare. The Barbadian pop artist is currently in the midst of an ambitious tour, playing seven different cities, in seven different countries, over seven days. As the tour hits London, there’s already been talk of drunken antics and streaking on the official ‘777’ tour plane. Before you get too excited, though, it wasn’t Rhi-Rhi getting her kit off; it would seem that it was just a drunk and frustrated journo.

The album itself, Unapologetic, has been making just as many headlines as the lavish release tour. When Rihanna posted a handwritten tracklisting on Twitter, many an eyebrow was raised to see Chris Brown’s name on there, signifying that the tabloids’ favorite former couple would perform a duet. Many a second eyebrow was also raised, when they saw that the title of the duet was ‘Nobodies Business.’ English language aficionados and domestic abuse experts alike were up in arms at the news, though Rihanna remains both defiant and unapologetic over it.

As for the music, so far, we have had the track ‘Diamonds,’ to give a taster of what to expect on Unapologetic. ‘Diamonds’ has already spent four weeks in the chart, having peaked at number two, which bodes well for album number seven from Rihanna.

Watch the video for ‘Diamonds’

Kid Rock returns this week with Rebel Soul; his ninth studio album. It’s two years since the release of Born Free, which charted at number five in the Billboard 200 and topped their Rock Albums chart. Kid Rock has taken the role of producer for Rebel Soul, hoping to replicate some of the success that he had with Rick Rubin on the last album. His band, Twisted Brown Trucker also re-join him for his sixth album to be released by Atlantic Records.

On Rebel Soul, Kid Rock is being his usual, over the top self and even debuts his new alter ego, Bobby Shazam. He recently explained to MTV just how Bobby was conjured up, saying “Oh, man, Bobby. He probably came from having too many adult beverages, and trying to come up with something fun and different to do musically, and maybe have this character that could come out at shows. He's just this psychotic rock and roller. Like, I picture his dad being a roadie for REO Speedwagon, and his mom was a high-priced call girl somewhere, and he's just out of his mind.” Worth a peek for the nonsense of Bobby Shazam alone, we reckon.

Watch the video for ‘Cucci Galore’

Remember last year’s American Idol Phillip Phillips? Well, if you were watching the World Series last month, he was the guy singing the national anthem… TV talent show winners are often cursed with a life of obscurity. In fact, sometimes, you’re almost better off losing, so that you’re free from the commercial pressures of signing that winner’s recording contract.

Hoping to buck that trend is this 22 year-old from Georgia, who releases his debut album The World From The Side Of The Moon, on Interscope Records. He may have the weight of a major record label behind him but that’s not necessarily enough to make it once he’s outside of the confines of the American Idol studio. His single ‘Home,’ released back in May might have charted in the top ten but Phillips was still riding high on Idol euphoria back then. His Dave Matthews-esque style might just fall flat out there in the real world.

Reassuringly for Phillips, though, Kelly Clarkson is living proof that you can walk away from a talent show triumphant and still enjoy some longevity in the recording industry. This week, she releases her Greatest Hits – Chapter One album, suggesting that still a few more years left in her yet. Clarkson won American Idol in 2002 and has gone on to win two Grammy Awards, 12 Billboard Music Awards and even has three multi-platinum selling records in the USA.

As well as all the past hits, Clarkson has also released a new single from the compilation album, entitled ‘Catch My Breath,’ which she co-wrote with Jason Halbert and Eric Olsen.

Watch the video for 'Catch My Breath'