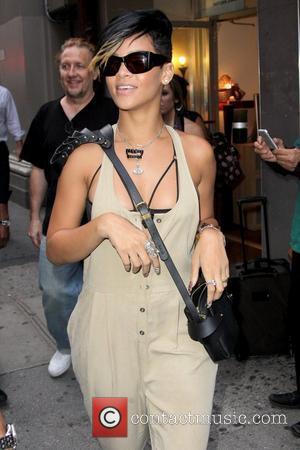 Two Los Angeles cops have been suspended over the leaking of the notorious photo showing a battered and bruised Rihanna following her beating at the hands of Chris Brown.
The horrifying picture made headlines around the world when it was published on celebrity website TMZ.com following the bust-up between the couple in February (09).
Police launched a probe into the leak after it emerged the shot was taken while the Umbrella hitmaker's injuries were being examined by officers shortly after the incident.
Two female cops - one based at the Wilshire Area station, the other at Hollenbeck Area - are now reportedly under suspension. Internal affairs officers have searched their homes, offices, and lockers as part of the probe, according to The Enterprise Report website.
They face disciplinary action and a possible charge of identifying a victim of domestic violence if their involvement in the leak is proved.
Brown was sentenced to six months hard labour and five years probation after pleading guilty to beating Rihanna in a car after a pre-Grammy Awards party.