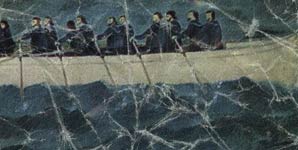 Andy Hull is the front-man of Manchester Orchestra as well as the man behind Right Away, Great Captain! For those who don't know Manchester Orchestra, they are one of the best upcoming rock bands and their songs capture a great intense and layered effect.

Right Away, Great Captain! started out as a side project (with a naval theme) but as time has passed it's developed into much more. Stripped down, the songs keep simple and raw, nothings over the top. Many of the songs show a haunting beauty and almost a vulnerability. A lot of the tracks have a similar tone to Bright eyes, and lyrically it's reminds of Tori Amos' debut.

Andy Hull is a singer songwriter's songwriter and performer, understated and beautiful, all in all his performance makes for a great album, different but akin to the quality of writing expected from Manchester Orchestra.