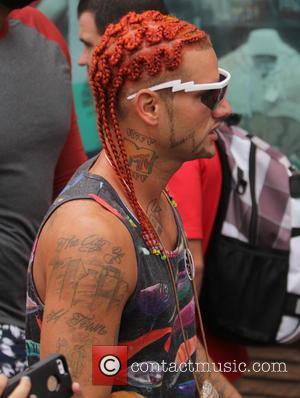 Rapper Riff Raff has teamed up with legendary wrestler Hulk Hogan in his bid to get ring ready for an upcoming fight.

The hip-hop star, also known as Jody Highroller, showed off his new buff body on Twitter.com on Wednesday (28Jan15), revealing he has added 55 pounds (25 kilograms) of muscle to his formerly thin frame, and posted a side by side comparison of his body before and after the intensive training.

In December (14), Riff Raff and Hogan both took to their social media accounts to announce the new partnership, with the veteran tweeting he couldn't "wait to start training" with his unlikely new pal.

The rapper also hinted to his new aspirations while talking to Tmz.com last month (Dec14), admitting he had stopped taking all substances except marijuana, and replaced drugs with a rigorous fitness regime.