Sir Ridley Scott and Leonardo Dicaprio could be set to team up on the big-screen adaptation of 'The Wolf of Wall Street'. 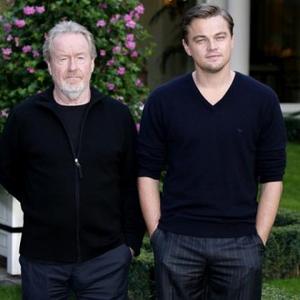 Sir Ridley Scott is in discussions to direct Leonardo Dicaprio in 'The Wolf of Wall Street'.

The 'Robin Hood' director is in early negotiations to work on the project - originally offered to Martin Scorsese - with Leonardo taking a leading role in the adaptation of Jordan Belfort's memoir of the same name, according to Deadline.com.

'The Sopranos' writer Terry Winter has penned the screenplay for the movie, which is a humorous take on a story regarding a stockbroker who levied funds to live an extravagant lifestyle until brought down by officials.

The timescale of production is not yet known however, as Scott is currently working on the prequel to the 'Alien' movies - a priority for studio, Fox - while Leonardo has also been strongly rumoured for Clint Eastwood's biopic about J. Edgar Hoover.

Earlier this week it was announced Scott would be producing a movie made entirely from clips from YouTube entitled 'Life In A Day'.

The director is encouraging people to film their lives on July 24, 2010 and upload them onto the video sharing website for consideration in the project, on which he is working alongside Kevin Macdonald.