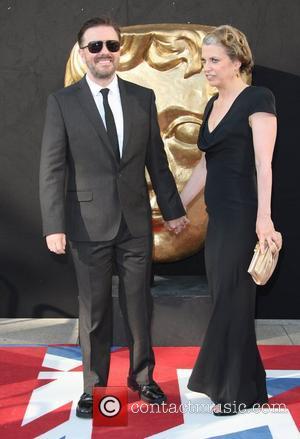 Ricky Gervais has been proffering his opinions on music in a recent edition of Q Magazine, and made his love of Bruce Springsteen explicitly obvious by dressing up as the great man for the photo shoot! Msn reports that the British funny man was clad in vintage Boss woollen hat, leather jacket and jeans attire, and he said "I kept thinking, It's got to be obvious. I don't think I'm cool. The last thing you want is me doing Bruce looking as if I think I'm cool."
Gervais went on to discuss whether he felt cool as a comedian, commenting "there's a fine line between being a prat and trying to retain too much dignity," and going on to add "Our job is to lose a bit of dignity. If you think someone can't take the mickey out of themselves, it's sort of over. Do you know what I mean?"
So go on then Ricky, who do you listen to at home? "Coldplay," apparently. Oh. "There's obviously a backlash against them. They're not the coolest band in the world, but I like the fact they just did it," he said defensively, "And then when you meet them they're nice, funny, normal people who are trying to be excellent at something. You can only applaud that. You can dislike their stuff but you can only applaud that attitude, you know?" We're nice people, no one gives us millions and applauds us for it.