Ricky Gervais remained coy when quizzed about his role in 'The Muppets... Again!', but hinted playing the lead human alongside Oscar-winning Christoph Waltz was surreal. 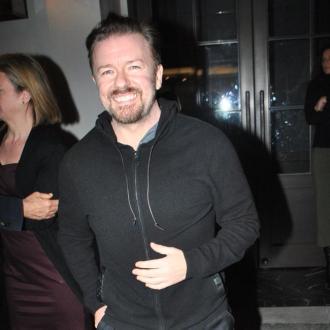 The British comedian and actor is set to star in the iconic children's film and although he revealed he got to work with legendary actor Christoph Waltz, Ricky is keeping tight lipped about his role in the movie.

He said: ''It's Muppets. Again, I can't tell you much. I'm the lead 'human', I love that. You don't want to up your station too much. 'Oi, hold on, you're not the lead, Kermit's the lead'. I'm the lead human and the cast is amazing, it's also got in it Ray Liotta, Tina Fey - I was working with Christoph Waltz yesterday.

''It's incredible. I said, 'You've won an Oscar,' he went, 'It doesn't make any difference.' He's just standing there, covered in dust, surrounded by these Muppets.''

Ricky, 51, was thrilled when he was approached for the part and although he ''worried'' about it clashing with the promotion of his new show 'Derek', he was adamant he wouldn't turn down such a big opportunity.

Speaking on Absolute Radio, he added: ''They said they want me to do it and then they sent me the script, I must read it soon, and I said yes, 'Of course'. I was worried about timing because I was in America launching 'Derek' on Netflix and I came straight back and started filming straightaway, and I was really worried about it.

''It's a big shoot and I've got other things on, so that was the only concern. The fact whether I was going to take it not or wanted to do it - that was out of the question, of course.''