Comedian And Actor Ricky Gervais Has Been Announced As The Host Of The 2016 Golden Globe Awards. 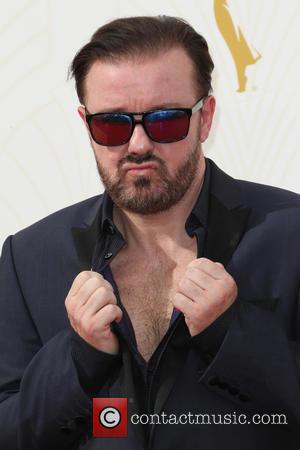 The British star previously hosted the ceremony from 2010-2012 before he was replaced by former Saturday Night Live stars Tina Fey and Amy Poehler, who fronted the show for two years.

Ricky, 54, upset many Hollywood A-listers with his pointed barbs during his first stint as presenter, but his comedic comments hit the headlines and drew big audiences for the telecast, and the star previously admitted that he liked being the man in the hot seat.

Promoting his TV show Derek in 2013, he said, "To be the most feared man in Hollywood for three hours was such fun."

Ricky previously insisted he would never return to host the Globes, but it appears show executives have been able to persuade him to reconsider.

"Ricky Gervais left us with a lasting impression and we are thrilled to have him back in our show as we honour the best in film and television," Hollywood Foreign Press Association president Lorenzo Soria told Deadline. "His off-the-cuff wit and quirky charm will surely have the room and audiences around the world at the edge of their seats."

Gervais has yet to comment on the announcement but he did retweet a picture of a cartoon silhouette of himself with the words 'He’s back!' across the front. That picture was first posted by Golden Globes officials on Monday (26Oct15).