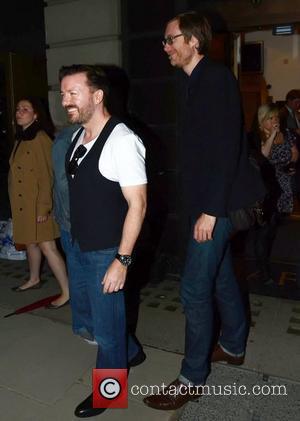 Picture: Ricky Gervais and Stephen Merchant attend a Q&A and a special screening of 'An Idiot Abroad' at the Princess Anne Theatre London, England -...

Ricky Gervais has turned down the chance to play the boss in the US version of his hit show The Office.

The comedian has already appeared in the American show making a brief cameo as British boss David Brent but said it would not be right to do the whole programme according to the Press Association. "They said 'Do you want to play the main role?' but what's the point of that? We made The Office, that was a document of what it was like to be in an English office and it was made by English people for English people, and this should be made by Americans for Americans."

The Idiot Abroad creator is also said to be undecided about whether or not to host the Golden Globes again next January in Los Angeles. He was heavily criticised in the US by actors such as Robert Downey Jr. following a series of jokes at this year's ceremony. "I'm torn because for three hours I'm the most feared man in Hollywood. Everyone's terrified, I did it twice because I wanted to improve on the first year and I think I did that, I don't know what I could gain from doing it again." He said speaking to The BBC's Radio 1. The Extras star has recently been working on new movie Spy Kids: ALL THE TIME IN THE WORLD which was released on 19th August.