Ricky Gervais Hits Out At Twitter Generation: "We Give Way Too Much Away Now"

Gervais is back as David Brent in ‘Life On The Road’ but a lot has changed since he created ‘The Office’.

The always outspoken Ricky Gervais has had his fair share of controversies on Twitter. But the comedian and actor says he’s now at the point where he won’t be explaining himself on social media anymore and if people don’t get one of his tweets they can “f***ing live with it”. 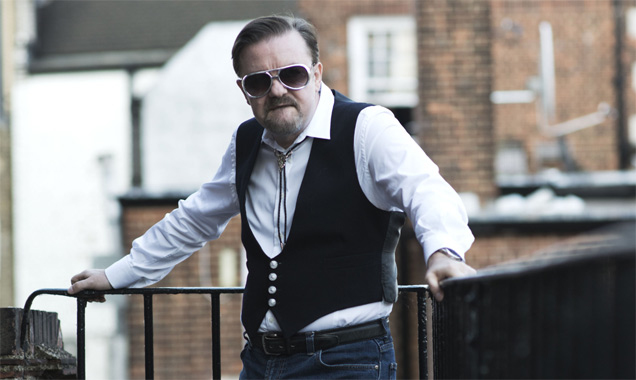 Ricky Gervais is back as David Brent

Speaking to NME about the return of David Brent in Life On The Road, Gervais explained how much social media has change society since we first saw the character. “In The Office, I didn’t have other characters blatantly saying: 'He’s a prat,' like they do in the film,” he said.

“People now say everything on their mind. It’s like everyone tweets their f**king innermost thoughts. It’s got worse and worse – we give way too much away now… Everyone’s f**king shaming these days. The first time I was on Twitter, I’d tweet something and if one person didn’t get something, I’d explain it. But now I go: ‘There’s the tweet, f**king live with it.’”

“I study people for a living, so Twitter’s good as I don’t actually have to meet these idiots. I can meet them from the safety of my Hampstead mansion, whereas Agent Starling [The Silence Of The Lambs] has to show up to the prison every day,” he joked.

Gervais also hit out at the modern famous-for-being-famous celebrity created by reality shows. “The Office was inspired by those quaint docusoaps of the ’90s where ordinary people got their 15 minutes of fame,” he said.

“But fame is different now – people live their life like an open wound to get another 15 minutes every day. Nothing is enough. People sell their f**king souls, and they sell their bodies, just to stay famous. They become famous for nothing, or for terrible things.

Speaking about celebrities who have fallen on hard times and end up doing reality shows such as ‘I’m A Celebrity..Get Me Out Of Here!’, he added: “They say: ‘I just want to change the public’s opinion of me.’ Why? F**k the public! It’s like therapy, but the worst kind possible. It’s never going to be good for you. We’re laughing at their delusions.”