He insists that David Brent's dream is far from his own.

It's been 13 years since audiences had their last glimpse of Ricky Gervais' iconic The Office alter-ego David Brent, and he's now back on the big screen in the mock-doc Life on the Road. Critics have been wondering if Brent's desperation to launch a rock-star career is an echo of Gervais' own ambitions. 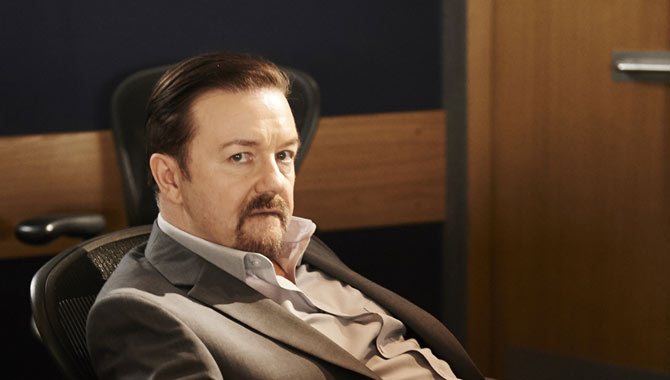 Ricky Gervais brings back David Brent in 'Life On The Road'

The comedian laughs this off. "It's a fake documentary!" he says. "I don't think I'm a pop star. The point is that Brent's been sold a lie. He was told that if you're not performing, you won't be popular. And if you're not popular, then you're nothing."

Gervais sees this as a comment on contemporary society. "People don't think they exist unless they're in the paper or they're trying to be a singer. For Brent, it's a vanity project. But it's really bad. He's a man at his lowest ebb."

Watch the trailer for 'Life On The Road' here:


And he thinks the time is right to revisit this character. "Since The Office we've had The Apprentice," he observes, "where people get on by saying, 'I'll destroy anyone who gets in my way.' So now it's harder, it's more dog-eat-dog. We have Donald Trump saying, 'I'd like to punch that person in the face!' It's like Gordon Gekko has come true: greed is good!"

To promote Life on the Road, Gervais has been touring with his band performing songs from the movie. "This is an album I have created as David Brent," he says. "It is part of that fiction."

Intriguingly, Gervais did have a brush with pop music stardom early in his career with the 1980s new wave group Seona Dancing. "It was all too good to be true," he laughs. "We put a single out and it nearly broke, so we put a second single out and that nearly broke but didn't. And that was our bite of the cherry. It was all over in about six months."

More: Read our review of 'David Brent: Life On The Road'

As for The Office, Gervais continues to insist that he will never go back, only forward. "I said I'd never bring back The Office and I won't," he says. "And this isn't that. This is David Brent now, what he's doing now. There might be another spin off - like the soundtrack album and live gigs - so he might pop up now and again. But as a huge big project, a series of David Brent or The Office, or another movie? Probably not."
Contactmusic
Facebook
Twitter
Google+
Pinterest
StumbleUpon
Reddit
Fark
Email
Comment
Follow Ricky Gervais