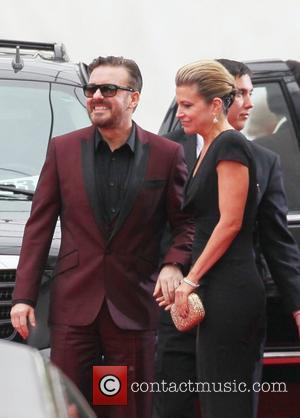 How does Ricky Gervais feel about Amy Poehler and Tina Fey hosting the 70th Annual Golden Globe Awards next year? Ricky has hosted the awards for the last three years, getting himself in a fair amount of hot water along the way, it has to be said but now he’s handing the reins over and – in true Gervais style – he’s made a few barbed comments, mainly aimed at E! for failing to include him in the annual Golden Globes best dressed list.

In a statement he gave exclusively to Entertainment Weekly, Gervais said “Good luck to Tina Fey and Amy Poehler at the Golden Globes. After failing three years in a row to make E! Channel’s Best Dressed list, I decided to hand over the reins,” said Gervais, adding, “Let me know if you run out of Scientology gags.” Gervais became known for sailing a little too close to the wind during his Golden Globes hosting stints. His 2011 opening monologue, for example, went like this: It's going to be a night of partying and heavy drinking. Or as Charlie Sheen calls it – breakfast. Wow, so let's get this straight, so what he did was, he picked up a porn star, paid her to have dinner with him, introduced her to his ex-wife – as you do – went to a hotel, got drunk, got naked, trashed the place while she was locked in a cupboard, and that was a Monday. What does he do New Year's Eve?” And it didn’t really let up from thereon in. Is he genuinely angry about losing the job though, or just having fun?

On Monday (October 15, 2012), NBC announced that Fey and Poehler would take on presenting duties, with their “unparalleled comedic timing” cited as the reason for landing the job.