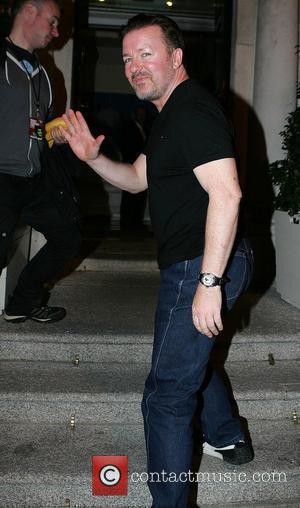 Ricky Gervais refused to talk Steve Carell out of leaving the U.S. version of The Office - despite his departure scuppering lucrative syndication deals.
Carell has played embarrassing boss Michael Scott on the series since 2005, in a role based on Gervais' original star turn as David Brent in the hit British version of the show.
Carell confirmed last month he doesn't plan to return to the series after its next season, and Gervais - executive producer of the show - insists it's the right decision even though it will cost the Brit future royalties.
On his blog, he writes, "Well it's official. Steve Carell will leave The Office after this next season. It was of course inevitable (and sad), but I wish him all the luck in the world.
"It was expected of me, as executive producer, to persuade him to stay on. With syndication in full swing, the more successful the show remains, the more billions we all make.
"It was tempting, but the truth is, I believe he is doing the right thing. He's fulfilled his contract and more, and is a huge film star now. (I knocked it on the head after 12 episodes and a Christmas special.)
"I'd be lying if I said he should do more. He shouldn't. He should move on, continue to do great work, and buy a new house every time The Office is repeated somewhere. (That's what I do. Maybe I'll buy one next door to him one day. That'll f**king teach him.)"