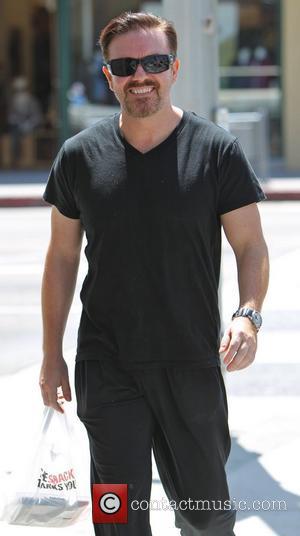 Ricky Gervais has friends in high places - British royal Prince Harry turned up to his recent stand-up show and asked for an autograph for his grandmother, Queen Elizabeth II.
The Office creator performed at London's Hammersmith Apollo venue earlier this month (Sep10) and mingled with Coldplay rocker Chris Martin and Prince Harry afterwards.
And, although Gervais snubbed the royal's invite to perform for British troops in Afghanistan, he happily obliged the prince's request for a note for his regal relative.
On his blog, the funnyman writes, "Hammersmith was great... Had a drink after the show with Chris Martin and Prince Harry. As you do.
"Harry was trying to persuade me to come to Afghanistan to perform to the troops. I said I was too scared. He said I could do Basra, which was the safest place. Yeh, the safest place out of all the other places in a war zone... I take risks with my comedy, not my vital organs. I said I'd think about it.
"On the day of the gig he wound me up by sending me a text saying that he was bringing his gran. I was obviously a bit panicked. She would definitely not have enjoyed the show.
"At the after-show he got me to sign a beer mat for her. 'To Liz II, Cheers! Ricky Gervais' (true). I will be checking ebay all week in case she is making money off me. I can't help but think that her signing a beer mat to me would be worth slightly more."