Rapper Rick Ross Took A Shot As A Basketball Coach At A Charity Match In Miami, Florida Over The Weekend (18-19apr15). 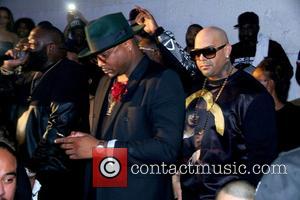 Ross served as coach for a star-studded group, which included a number of American football players, while the opposing team was lead by former NFL lineman Bryant MCKinnie.

However, Ross' skills proved to be more suited for music as his team lost to MCKinnie's, 62 to 38.