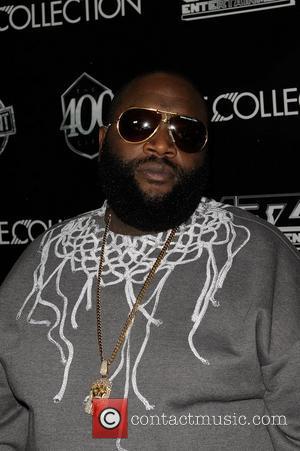 Rick Ross has finally announced the release date for his forthcoming album, 'God Forgives, I Don't,' Rolling Stone reported yesterday (May 2, 2012). The album, which will be his fifth solo studio album, has been scheduled for release on July 31, 2012. Ross and his Maybach Music Group colleagues assembled for a press conference at the Eventi Hotel in Manhattan, New York yesterday to discuss their future plans.
"The stories that are being told on this record are gonna make it stand apart," Rick told the press that had assembled there. "It wasn't just about hot beats and hot rhymes but something that was needed, something that was necessary. This was the missing part of my legacy." The good news didn't stop there though, as Ross announced that he's teaming up with Swizz Beatz and Reebok to launch a 'big and tall' clothing range. "I was thrilled that instead of just doing a regular sneaker, we gave Ross his own big and tall line to go and express all his fashion, all his flair" said Swizz. It's not just beats and clothing lines that Rick's been promoting recently, either. Puff Daddy was also present at the conference to praise Ross for his hand in promoting his Cîroc vodka. "He's a genius to me," Diddy told everyone.
Back to the music, Rick Ross also announced a new signing to the Maybach Music Group, in the form of the R&B singer Omarion. A new single, entitled 'Let's Talk' is in the pipeline, as well as an EP.