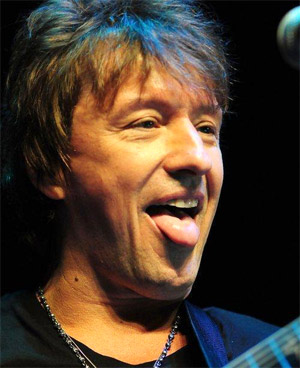 First Single: "Every Road Leads Home To You"

Richie Sambora, legendary rock musician and founding member of Bon Jovi, has confirmed a string of European tour dates. The dates kick off in Amsterdam on 9 October, he then plays in Munich and Berlin before arriving in London to play the Shepherd's Bush Empire on 16 October, tickets for the London date are on sale on Friday 31 August.

Sambora recently announced the release of a brand new album "Aftermath Of The Lowdown", out 17 September, single "Every Road Leads Home To You" is available now at www.richiesambora.com . The Shepherd's Bush Empire date will be a chance for fans to see Sambora in an intimate venue, they will be treated to tracks from his forthcoming album along with some Bon Jovi classics.

Aftermath of the Lowdown, his third solo album, is a departure from his previous major label releases - Undiscovered Soul (1998) and Stranger In This Town (1991) - Sambora has returned to his music roots, creating a highly personal album that is both raw and powerful. Aftermath of the Lowdown is Sambora laid bare, he makes it clear that he has a story to tell and that the songs are deeply personal. Lyrically, he's pulling no punches: "This is the truth, the lowdown," he says. "And after you speak that truth, there's always an aftermath."

Sambora has spent almost three decades as an integral part of one of the world's most beloved bands. He's created some of the most instantly recognisable guitar sounds and penned many of the greatest rock anthems in a generation. In 2010 - twenty-six years after releasing their first album - his band were named the top touring act in the world for the second time, a feat only previously accomplished by The Grateful Dead and The Rolling Stones. After playing to over 35 million people around the globe, Sambora returned home and devoted himself to writing the new album.