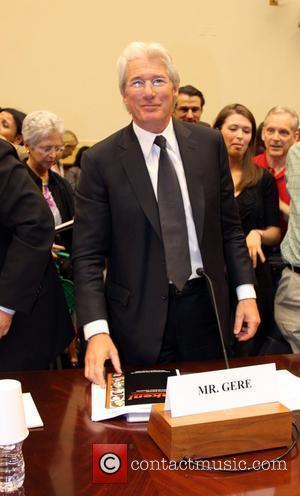 Picture: Richard Gere, actor and chairman of the board of directors for the International Campaign for Tibet, testifies before a House Foreign Affairs Committee hearing in...

Hollywood actor Richard Gere took his fight for Tibetan rights to the U.S. Congress on Thursday (02Jun11), urging President Barack Obama to increase pressure on China over the matter.
The Pretty Woman star, a political activist and a Buddhist, has spent years campaigning on the subject of Chinese/Tibetan relations, following decades of conflict there.
He headed to Washington, D.C. on Thursday to address the U.S. House Foreign Affairs Committee and urge politicians to step up their support of the Tibetan people as they fight oppression.
Praising Obama for finding "new footing on how to deal with the Chinese", Gere admitted he would like to see the leader do more for Tibet's citizens, according to the Afp.
He adds, "Every time we are wishy-washy with them, they take advantage of it. (The Chinese) only deal with pressure, seriousness, firmness.
"With the right attention from the United States - the most critical force for Tibet - there can be a resolution without bloodshed."
The star also called on officials to continue funding broadcasts such as Radio Free Asia and Voice of America in the country.
Gere explained, "When the Dalai Lama met President Obama in the White House in February 2010, monks in Amdo lit off fireworks to celebrate that the world's greatest democracy still cared for the plight of Tibet. How did they know the new president would be meeting with their spiritual leader? By listening to Voice of America."