Reese Witherspoon received a Star On The Hollywood Walk Of Fame yesterday (01.12.10) while her two children looked on. 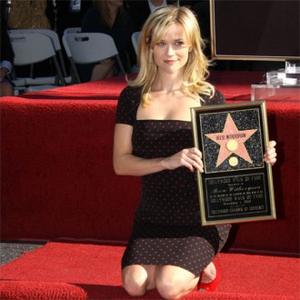 Reese Witherspoon has been given a Star On The Hollywood Walk Of Fame.

The blonde star - who won the Best Actress Oscar for her role in 'Walk the Line' in 2006 - was presented with the prestigious honour on Wednesday (01.12.10).

The actress was accompanied by her two children, daughter Ava, 11, and seven-year-old son Deacon, for the induction ceremony which was held outside the W Hotel in Los Angeles.

Reese looked stunning in a black and red polka dot dress as she was presented with her tribute - the 2,425th star dedication on the famous avenue.

Her boyfriend, Hollywood agent Jim Toth, was also there to see his girlfriend - who has appeared in a host of hit films, including 'Cruel Intentions', 'Sweet Home Alabama' and 'Legally Blonde' - receive the accolade.

The 34-year-old actress - who divorced actor Ryan Philippe in 2007 and split from Jake Gyllenhaal in 2009 - has admitted she is very "comfortable" in her relationship with Jim and says they are benefits to date someone who isn't famous.

In the January 2011 issue of America's Glamour magazine, she said: "I have a little perspective on this. I wouldn't say it's easier. Every relationship has its own dynamic. And I don't want to disparage any of the other relationships that I've had that were meaningful and wonderful. But what I'm finding out is that it's very comfortable to be with somebody who understands my career, but doesn't do what I do. He's a great guy. He's wonderful."

Reese's next film 'How Do You Know' - which also stars Paul Rudd and Owen Wilson - is released on December 17 in the US.