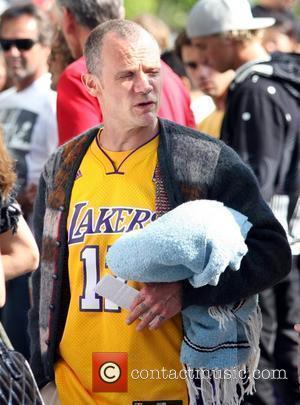 Picture: Flea of the Red Hot Chili Peppers arriving amongst the crowds of fans coming to watch the second finals match between Orlando Magic and the...

Rockers Red Hot Chili Peppers are considering taking legal action against British pop star Diana Vickers over similarities between her new track and the band's classic Under The Bridge, according to U.K. reports.
The chart newcomer, who became popular in her native U.K. after starring in Simon Cowell's talent show The X Factor, recently admitted she had decided against changing the chorus of her new song My Wicked Heart - despite writing the record after listening to the rockers' 1992 anthem.
However, the alleged plagiarism has reportedly angered bosses at the band's label Warner Bros., and executives are preparing to launch a lawsuit over copyright issues, according to Britain's The Sun.
A source tells the publication, "She has done herself no favours by revealing she listened to the track while writing My Wicked Heart."
A spokesperson from the band's record label has refused to comment.