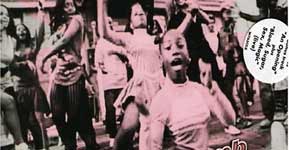 A band that needs no introduction, this is the fifth single to be lifted from their two-disc, chart-topping record, "Stadium Arcadium". They play a huge gig at Hampden Park in Glasgow before headlining the Carling Festivals in Reading and Leeds.

Finding the band in full-on funk mood, "Hump de Bump" is a party track that acts as an example of the filler that streams through their most recent album. While by no means awful, it does fall way short of what are admittedly very high standards for RHCP by being instantly forgettable. The band obviously has fun with the track, but there's no doubt that it is their darker experiences which bring out their best work ("Under The Bridge" and "Otherside" spring to mind). They're now one of the biggest bands in the world, but are in danger of losing what put them there in the first place.