There's a reason why the Red Hot Chili Peppers have been at the top of their game for over 25 years and during this special gig for Radio 1, they magnificently demonstrated what it is. Unforgettable tracks, distinguished vocals and monumental guitar playing all added up to one hell of a memorable performance. 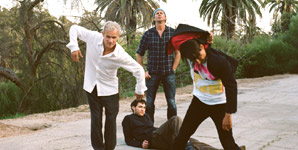 After getting off to a slightly rocky start with unclear vocals alongside the scratchy chords of 'Monarchy of Roses', the quartet quickly found their feet and launching into a frenetic rendition of 'Can't Stop' they garnered a raucous reception from the small but electrified audience. 'Factory of Faith' provided the first opportunity of the evening for legendary bassist Flea to exhibit the astonishingly tight riffs which have earned him such acclaim, although newest member guitarist Josh Klinghoffer also proved that his offerings are certainly not to be balked at either. The tribal backing beat of 'Throw Away Your Television' whipped up energetic chanting as if in preparation to march into musical battle whilst latest single 'The Adventures of Rain Dance Maggie' had Flea on his knees and the audience continuing their sing-along.

A partial rendition of 'Sweaty Skinny Man' saw the guitar pace quicken to such a speed that Flea and Klinghoffer were practically tripping over themselves, and a mighty rendition of 'Californication' showcased Kiedis' distinctive vocal tone and ability which had occasionally been overpowered by the heady guitar chords. Not one to be left out, the encore kicked off with a remarkable drum solo from Chad Smith before being joined by his bandmates to launch into 'She's Only 18'; a rarely played track which in turn garnered an enthusiastic response. The exquisite set was wrapped up with a stunning performance of 'Give It Away' which stirred both band and audience alike into one final frenzy.

This was the first gig that the band have played in the UK in four years and the energy was immeasurable. Kiedis threw himself about the stage, twisting and flailing as if possessed and certainly nowhere near reflective of the half-century his age owns. Between sauntering around the space with panache and taking the time to dance with Kiedis and Flea's children at the side of the stage, the band had us utterly enchanted. An inspiring showcase of both old and new material attested to the fact that the Chili Peppers have impressively sustained a level of talent and capability over the years whilst many of their contemporaries have fallen at the first hurdle. With performances like tonight's, we can only hope that the band will continue their run for many more years to come.

For your chance to listen, highlights of the Red Hot Chili Peppers' set live at Koko will be broadcast on Radio 1 between 7pm and 9pm on Monday 12th September.