Following the release of their tenth studio album, 'I'm With You', earlier this year the Red Hot Chili Peppers are on their first UK arena tour with new guitarist Josh Klinghoffer. The band will move onto mainland Europe, but return in June for massive outdoor shows in Dublin, Sunderland and Knebworth. 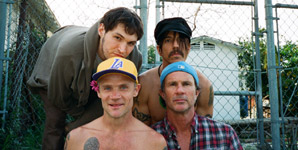 After opening with a rousing 'Monarchy Of Roses', the Chilis have a choice to make - do they focus on promoting their latest record, pleasing the mainstream, or satisfying older fans? With such a gargantuan back catalogue it would be difficult to do all three and ultimately - and pleasingly - they fall between the latter two options. Whilst 'The Adventures Of Rain Dance Maggie' and 'Look Around' sit in the set comfortably, favourites such as 'Otherside' and 'Dani California' are greeted rapturously from an enthusiastic crowd who get the energy returned from the brightly lit stage. Anthony Kiedis and Flea bounce around with more energy than men half their age, while Klinghoffer is so engrossed in his dextrous guitar antics that you fear he'll crash into something or someone - but doesn't. The mid-set placing of 'Under The Bridge' is a nice surprise, but of more joy to keener fans are the inclusions of 'Blood Sugar Sex Magik' and 'Sir Psycho Sexy', classics that perhaps get overlooked for more commercial tracks. In some ways it is a brave gamble - 'Scar Tissue' and 'Universally Speaking' being examples of omissions tonight - but it just about works, particularly when the likes of 'Can't Stop' and 'Californication' still thrill. With one signature tune performed it is inevitable that 'Give It Away' closes proceedings, and it does so in fine style, giving the crowd one last opportunity to get their funk on. Based on this evidence the events next year should be amongst the summer highlights.