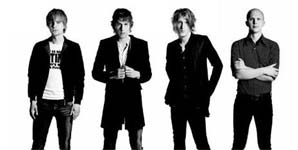 Fresh from the V festival and with a fantastic self titled number one album; which certain parts of the music press are calling 'the best guitar album since Definitely maybe'. The band now release the album in the hard to break USA.

Contactmusic.com got the chance to chat to Johnny and Andy.

Contactmusic: How was the V festival? It was pretty wet wasn't it?

Razorlight: [Johnny] It was fantastic! Wet? When we were there it was sunny.

CM: Did you get the chance to see any of the other bands?

Razorlight: [Johnny] Not really we were working all day.

CM: So the album has just been released in the states and has been out in the UK for a few months and I've got to say you've tackled the 'difficult second album' with ease. Was it as easy as I'm so flippantly presuming?

Razorlight: [Johnny] It was quite straight forward recording sessions really in the end. We rented the warehouse in Notting Hill, we were there for four months writing it and rehearsing it and then we did that mini-tour in England and then we went in and recorded it. So it was quite easy in that sense.

CM: Apart from Kirby's house. Was there any of the tracks left over from 'Up all night' that made it across? Or was it a completely fresh start?

Razorlight: [Andy] It was a fresh start pretty much.

Razorlight: [Johnny] I don't think so, it was kind of a muddle. We didn't write it in the order it appears on the album.

CM: The music press are labelling the album a classic, how does that feel? Does it put extra pressure on you guys to deliver again on the next album? Or do you just live in the moment?

Razorlight: [Johnny] You don't really look forward too much, you just take it as it comes basically. It's great that people like the record, it was a really enjoyable record to make and it's a real joy to play it and sing it. We're very proud of it.

CM: So you don't feel any pressure?

CM: Talking about pressure, I know it was a while ago now, but how did it feel to cover The Cures - 'Boy's don't cry' on their MTV special? You know especially when the guys are sat there watching you.

Razorlight: [Johnny] That was something that came up. They said "Do you want to come and play a Cure song, as long as it's 'Boys don't cry'?" and we were like sure lets go and do that. That recording that was on MTV was basically the rehearsal and pretty much the first time we played it. It was a song we all knew and all loved, so we played it. Yeah it was great.

CM: So what keeps you motivated?

Razorlight: [Johnny] I just love performing it the greatest feeling in the world being on stage. It's a great freedom and a great form of self expression, it's a wonderful thing.

CM: So do you find it cathartic to express yourself musically and lyrically?

CM: Johnny, I heard that used to be addicted to Teletext? I know you were a fellow fan of 'Words of Wisdom' but did you ever play Bamboozle?

CM: I know what you mean, I felt like that loads of times.

Razorlight: [Johnny] The internet has now killed Teletext to a certain extent hasn't it?

CM: It really has. When the terrestrial gets switched off in a few years, I think that's the end of it really isn't it?

Razorlight: [Johnny] That will be a real shame for all future generations.

CM: Maybe we should start a Teletext club.

Razorlight: [Johnny] What's happening to terrestrial telly, is it finishing?

CM: Yeah it's all moving over to digital, I think it's in about four years and that's it, they're turning it off. It's just not the same the digital Teletext, have you been on it?

Razorlight: [Johnny] Yeah it's pretty rubbish, it's quite slow compared to the old Teletext.

CM: I was interviewing Howling Bells the other day and we were talking about dreaming; now I was telling them that I didn't dream when I traveled around. Now you guys have traveled a lot. How does it affect your dreams?

Razorlight: [Johnny] Well my dreams sort of lurch in incredible directions the moment I go on tour, they seem to go into a completely different sphere.
[Andy] You eat more cheese on the tour as well.

CM: Well here's a fact for you, he actually claims that he doesn't dream at all. Did you know that?

Razorlight: [Johnny] Well actually Bjorn our guitarist is like that and he claims that he doesn't remember any dreams in the last five years. Maybe it's a northern European thing and there are no dreams in northern Europe.

CM: Do you remember your last dream?

Razorlight: [Johnny] No not really.

CM: I think by about dinner time you forget them don't you?

Razorlight: [Andy] Do you always remember your dreams?

CM: When I'm at home I dream just not when I'm away, you know your sleep pattern is broken and that, but I usually forgot them after a few hours anyway.

Razorlight: [Johnny] Yeah totally, when your touring your dream pattern is completely different than when you're at home and also when you're on holiday.

CM: Johnny, I heard about your screenplay plans, what's the latest on that?

Razorlight: [Johnny] Oh yeah, well I did start writing something a long time ago about 3-4 years ago, but the music has really taken preseance over it. So I think it's something I'm going to shelve for a couple of years.

CM: It's reported that you recorded your mobile number into 'Vice' on the first album. Have you got any interesting anecdotes of fans ringing you up?

Razorlight: [Johnny] Yeah loads of people would ring me up; it was quite an interesting thing. The phone didn't actually ring as it was just a number and a voice mail. It was my old phone which I'd lost, but I could phone it up and get the messages. I still can and people ring it all the time. It's interesting.

CM: 'America' is the next single off the album, how expectant are you when you release singles?

Razorlight: [Johnny] We are really confident in the single, we think it's a really good song, so we hope it'll do really well.

CM: I like it, it's my favourite track off the album and I'm looking forward to seeing how it does.

Razorlight: [Johnny] We'd like to go out and do the 'Big day out' and all that certainly, but as always we just wait for the phone call and Mexico we'd love to get out there for sure it's a great place.

CM: So to finish thing off; what was your favourite board game as a kid?

Razorlight: [Johnny] I'm afraid to say I really liked Monopoly; I could play it for hours, while everyone else was completely bored of it.

CM: That's something you really didn't see in kids, I remember when I was a kid I don't think I ever finished a game.

Razorlight: [Andy] It goes on for a long time doesn't it. I liked Lego, I didn't really like board games they were too dinky.

CM: That's it, Thanks a lot guys I know you're really busy with interviews and that so I appreciate taking time out.

Razorlight: [Johnny] It's a pleasure.

Razorlight's self titled album is out now in the UK and USA.