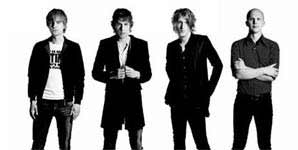 While 2004's "Up All Night" displayed Razorlight to be a rock band of promise, last year's self-titled follow up saw them fill that potential and break into the mainstream. This is the second arena tour of a campaign that will see the quartet headline T In The Park, Oxegen and the Carling Festivals.

A wall of cheers greets drummer Andy Burrows as he is allowed centre stage for a solo that will launch into "In The Morning" when joined by his band mates. Clad in his trademark white attire, Johnny Borrell bounces around nearly as much as an audience who are in good voice and out for a good time - especially when the band crack out a gem like "Golden Touch". The karaoke volume is deafening and affords instruments to be silenced for a spine-tingling audience a cappella that only occurs with a classic song, but that's not to say album tracks such as "Back To The Start" and "Don't Go Back To Dalston" aren't also well received. Reports of a dysfunctional unit couldn't be further from the truth on this evidence as Borrell and his merry men put in a tight and professional performance.

Predictably it is "America" which generates the biggest response of the night, accompanied by the glow of hundreds if not thousands of mobile phones illuminating the arena. Another grand sing-a-long, it demonstrates the range of the band's music when set with the likes of the fantastic "Vice" and "Stumble And Fall". It's highly ironic that songs themed with isolation and loneliness are being celebrated by so many thousands, particularly the conclusion to the evening, "Somewhere Else". It's a glorious end to proceedings and it's highly unlikely that anyone in attendance really would want to be somewhere else - it's doubtful they'll have had as much entertainment or fun.