Review of One wish Single by Ray J 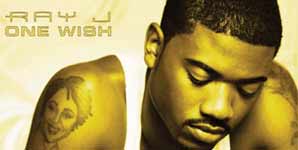 Riding on the coat tails of acting success, Ray J moved from TV acting off Brandy's (his sister) show 'Moesha' and got into music at the age of 14. I first remember seeing him on one of Brandy's video's and soon after he released an album 'This ain't a Game' which featured the single 'Wait a minute' in 2001, a club smash with a banging beat from the Neptunes (before they became really massive with the likes of Justin Timberlake, Britney and Nelly).

The single 'One wish', produced by Rodney Jerkins, is a ballad with Ray J in full falsetto trying very hard to convince us, the listener, he's matured and now knows what it must feel like to really desire that one woman. This is done over a smooth beat that is a combination of street R&B and contemporary soul groove. 'One Wish' is looking set to be his biggest hit so far having reached the top 10 of the billboard chart.