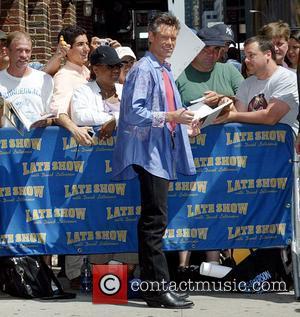 Troubled country star Randy Travis allegedly walked into a convenience store in Texas naked and tried to buy cigarettes shortly before his Dwi arrest last week (07Aug12).
The singer crashed his car in a construction area and was allegedly found naked at the scene, lying on a stretch of road in Grayson County.
He was arrested on suspicion of driving while intoxicated (Dwi) and felony retaliation after he allegedly threatened police officers.
It has now emerged Travis' troubles started earlier in the evening when he reportedly walked into a Tiger Mart store without any clothes on and demanded cigarettes from the puzzled cashier, who called in the authorities.
Store clerk Scott Robinson claims Travis left the shop when he realised he didn't have any money on him to pay for the goods.
Robinson tells San Antonio's Woai-TV station, "He walked up and I said, 'What are you doing?' He ordered a couple (of) packs of cigarettes, just like anybody would order a pack of cigarettes - except he was naked. I said, 'What are you doing in the store naked?' And he said, 'Just give me the cigarettes'...
"He was looking at his hands and he didn't have any money on him. I was looking at him; I said, 'How do you plan on paying for these?' He just kind of gave up and left. I had no idea it was a famous person."
Store owner Mike Ziyadeh reveals Travis is a regular customer and is normally fully-clothed and well-behaved, adding, "He always comes in, just come in and get his stuff and leaves. Never been a bother... It was an incident (in the store). It was (the) talk of (the) town, I guess."